Last week we went over how to visually exam a wine and gather information by sight. Today we will go over the second step in evaluating wines… searching for and identifying aromas. This is probably the most difficult part of wine evaluation. However, with a little thought and practice, you can open door to a whole new level of wine appreciation.

END_OF_DOCUMENT_TOKEN_TO_BE_REPLACED

All in the Eyes of the Beholder

When tackling such a vast subject as wine, and all the mythos surrounding it, finding a starting point can be rather daunting. I figure tasting wine is a good start as that is where every past and future cork dork starts. To the casual observer, the process of evaluating and tasting wines can seem needlessly complex and, at times, confusing. Here I hope to demystify some of the processes involved with tasting wines both at home and in a public tasting setting.

END_OF_DOCUMENT_TOKEN_TO_BE_REPLACED

Visit the Northern Illinois Wine Trail website where you can view and/or download the guide or go directly to the PDF at http://www.northernillinoiswinetrail.com/site_media/static/images/wine-brochure-2017.pdf . 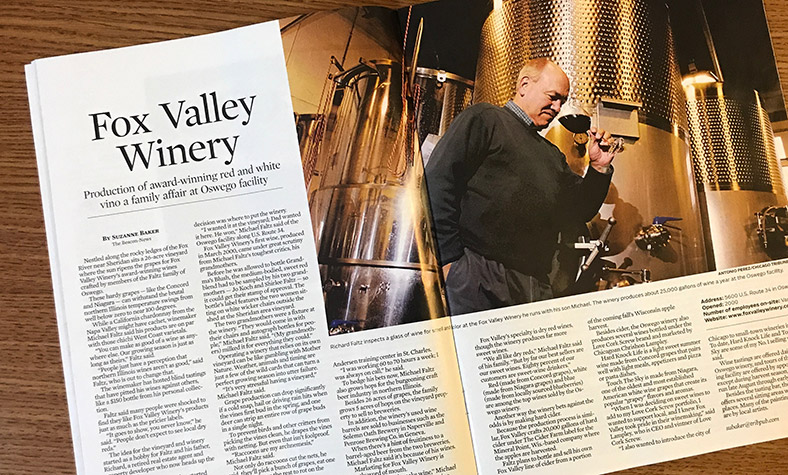 Published by the Chicago Tribune, this magazine contains fascinating articles about products made in the Chicago suburbs.  The Fox Valley Winery was featured in one of the publications, with Richard Faltz pictured inspecting a glass of wine for smell and color.  Richard runs the winery with his son and winemaker Michael Faltz.  The winery produces about 25,000 gallons of wine a year at the Oswego, IL facility.  The 26-acre vineyard is located along the rocky ledges of the Fox River near Sheridan, IL.  Fox Valley’s specialty is dry red wines, though the winery’s best sellers are their sweet wines.  Wine tastings are offered daily at the U.S. Route 34 facility in Oswego, with tours available by appointment only. The building also offers a tasting bar, two fireplaces, room rental, and many crafts from local artisans.

For Midwesterners, arriving in wine country means hopping a plane or driving for days. Or does it?

Over Memorial Day weekend, we traveled to Illinois to camp with friends. As we usually do, we hit a couple of wineries, which we’ll write about in detail in later columns. But you may wonder why we make sure we stop at wineries on every trip we take, even with our children in tow. The answer is simple: There is no better place to learn about wine than at a winery.

Head-high cornstalks line a path that runs through the flat farmland of northern Illinois about 60 miles west of Chicago. The corn has been harvested, leaving tall golden stalks withering in the strong fall sunlight, but still tall enough to block most of the view. Overhead is a deep blue sky with puffy cumulous clouds as inviting as a feather duvet.

Suddenly, you crest a rolling hillside and you’re not in Illinois anymore. At least, the landscape isn’t prairie like. It resembles California’s wine country, with terraced vineyards sweeping down toward the banks of the glinting Fox River Valley. Vines, heavy with clumps of juicy purple grapes, cling to south-facing slopes.

The vines belong to the Fox Valley Winery at Oswego, opened to the public in 2003. Last year it produced about 30,000 gallons. It grows about 22 percent of the grapes it uses and is aiming to raise this to 50 percent. Grapes flourish in a microclimate created by the river valley, where sandy gravel soils provide ideal drainage.

Discovering this well-regarded family-owned and operated winery in Illinois might come as a surprise, but this section of the Fox River Valley southwest of Aurora is full of the unexpected. This includes a celebrated example of architecture by modernist Ludwig Mies van der Rohe, a restored 1878 opera house in Sandwich and a bed-and-breakfast in Plano that doubles as a showroom of interior design (yes, you can buy the bed you sleep in, the table you eat off). You’ll even find an unusual retreat where you can learn to spin and weave wool, staying in a quiet, comfortable guest room and enjoying afternoon tea with homemade scones.

Fox Valley Winery is among more than 70 wineries that make up Illinois’ fast-expanding winemaking industry. It has tasting rooms in Sandwich, Oswego and Geneva.

Faltz is a real-estate developer who easily slips on his winemaking hat. “One career is a profession,” he says, “one is a passion.” It also is important, he says, “not to retire from something, but to something.”

One aspect of winemaking that Faltz especially enjoys is the ease with which it can become multigenerational. Three family members work full-time at the winery.

“We concentrate on making the best wine we can with Illinois fruit,” says Faltz. He describes Chambourcin as “king of the Illinois reds,” a workhorse grape that performs well as a varietal and also in blending.

Near Plano, follow the footsteps of actor Brad Pitt, an architecture buff who last August traveled to the Fox River Valley to The Farnsworth House, an ultra-modernistic glass-encased dwelling built on a 58-acre site along the Fox River. It was designed by Mies van der Rohe in 1951 and now will get international recognition in a jeans commercial that Pitt shot there (earning $50,000 for upkeep of the landmark home).

Seasonal tours are offered, with knowledgeable docents ready to immerse you in the house’s colorful — and oft times rancorous — history.

Innkeepers Alan and Robin Langguth joke about the “Minnie Pearl” price tags on the tasteful furnishings and accessories at The Homestead, their bed-and-breakfast in Plano, but they are quite serious about their interior decorating business (Chicago Bears coach Lovie Smith is a client). As a result, when you check in at The Homestead, you’re set for a stay at a bed-and-breakfast that doubles as a decorators’ show house. Breakfast also earns top billing: egg-and-bacon casserole, banana souffle and stuffed French toast.

The house was built in 1854 and is listed on the National Register of Historic Places. Reminiscent of a rural Tuscan villa, it is shaded by a stand of 50-year-old white pines on a two-acre estate with an outdoor sculpture gallery and labyrinth. A Chicago Bears weekend football package includes two nights’ lodging, a pair of game tickets, dinner for two at Walter Payton’s Roundhouse and a limo to and from the game. Cost is $1,595 per couple.

Then there is Esther’s Place at Big Rock, where fiber is the medium and supporting local agriculture is the message. Esther’s is an exclusive retail store for co-op products and fiber artists of all skill levels. Shop for wool from local Illinois flocks and for American-crafted spinning wheels and looms.

Get details of a varied lineup of classes as well as retreats in a beautiful Victorian setting where you can hone your skills, or acquire new ones, at spinning, weaving, knitting and felting. Especially for the holidays are basic classes that produce a felted Nativity scene and, ideal for gift giving, a felted soap bar wrapped in its own washcloth.

Foodies will find plenty of rewarding diversions in the region, ranging from the Wurst Kitchen in Plano, with a repertoire of 80 different varieties of sausages plus assorted schnitzel, to Blackstone Bar & Grill at Yorkville, with excellent steaks and prime rib.

Kelly’s Pub & Grill at Sandwich incorporates a shiny “Pullman Palace” dining car that Teddy Roosevelt used during three whistle-stop election campaigns. House favorites among its Irish fare are “boxties,” potato pancakes with a variety of fillings such as corned beef and sauerkraut and steak and mushrooms.

Mileage: Sandwich is about 60 miles west of Chicago.

Mike Michaelson is a travel writer based in Chicago and the author of the guidebook “Chicago’s Best-Kept Secrets.”